by
Yoo Heekyung
translated by
Stine Su Yon An

father inside my coat

it is only after i lose my wallet that i find father inside my coat. he is holding a long and slender cigarette between his teeth. dear father inside my coat like wet feet, how do we make sense of this strangeness? i put my hands in my empty coat pockets and look back at father. birds fly up from the shadows. i am certain i saw them, the faint traces. father inside my coat is still cold, and i am at a loss. father. yes? are you happy? why would i be happy? then why did you do it? that’s a question i should ask. i raised my head in the direction that was disappearing. leaves trembled between the streetlights and the trees on the avenue. but it seems we must continue arguing, even inside the same coat.

this place is a passage of worn-out people. they usher their frayed legs up the stairs.

the train has not even once arrived on time. accordingly, clocks are as useless as the train schedules here.

those who departed early in the morning return past dusk. occasionally, those who arrive late into the night walk with an increasingly tattered gait.

the passage remembers one man’s passing. his causa mortis: winter. when he was buried in the frozen earth, his wife wept with sorrow. like a train that was about to arrive.

memory is nothing but mere memory. similar to my hesitation to write when something comes to mind, the station does not move. no, the station trembles a little each time a train departs. slowly at first, and then faster and faster, the station disappears.

23:24. yet another train will arrive from the city. the passengers preparing to disembark remain out of sight. no one is waiting to board.

just barely, the old people walk on the streets blanketed in snow. on this disquiet night, i grill beef intestines while reading a letter a young man had written after he had spent the night with his first love. the man gets weepy over past moments, and above the butchered memories, the steam collects into a fog

believe it or not, but while coughing, i think of the musical notes i clutch in my frozen hands. this bent present, all of this, is like a song to me. the outside is, as always, the things swallowed and spat out by the winter of my youth.

how shiny it still seems within this time, the haggard name that is “us.” this night shrouded in snow resembles only a vast cave. but to stay quiet and to face my burning face, abruptly, the next day, i ache with the fallen snow

Translations from the Korean 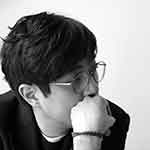 Yoo Heekyung 유희경 is a South Korean poet and playwright. He is the author of Oneul achim daneo (2011), Dangsinui jari – namuro jaraneun bangbeop (2013), Uriege jamsi sinieotdeon (2018), and other collections. He is a playwright with the theater company 독 (dock) and a member of the poetry collective 작란 (作亂) (jaknan). In 2019 Yoo was awarded the Hyundae Munhak Sang (Contemporary Literature Award) for his poetry. He runs ,wit n cynical, a series of poetry bookstores and project spaces in Seoul. 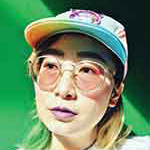 Stine Su Yon An is a poet and translator based in New York City. Her work has appeared in Electric Literature, Black Warrior Review, Waxwing, Pleiades, and elsewhere. She holds an MFA in literary arts from Brown University.

The expanded Summer 2021 issue of World Literature Today foregrounds Palestine Voices in a cover feature showcasing 30 of the most prominent poets and writers from the West Bank, Gaza, Jerusalem, Tel Aviv, and the diaspora, guest-edited by Yousef Khanfar + poetry & fiction from Hong Kong, Hungary, and South Korea. At 128 pages, the issue is bursting at the seams with the best poetry, fiction, essays, interviews, and book reviews from all over the world!

City Profile
Vienna’s Summer Lit-up
by Sylvia Petter
New in Translation
Icelandic Literature in Translation: New and Noteworthy Titles for 2021
by Björn Halldórsson
What to Read Now
An Island in Dispute, by Alexis Romay
by Alexis Romay
Translator’s Note
Translation as Detective Work
by Jozefina Komporaly
Linguistic R/Evolutions
How I Stopped Worrying and Learned to Trivas with Words
by Adnan Mahmutović
Outpost
Timbooktoo: The Pipeline Bookshop
by J. R. Patterson

In Colombia, Treading the Border between Memory and Magic: A Conversation with Ingrid Rojas Contreras
by Erik Gleibermann

Portrait of a Lady on Fire: A “Manifesto about the Female Gaze”
by Veronica Esposito